Video games have a glorious history of violence. After all, any good narrative involves a protagonist resolving conflict, and how better to dispose of any antagonists or other obstacles except by the proper application of the appropriate weapon?

While the politics and practicality of firearms can be endlessly debated, what cannot be denied is their prominent, crucial role in video games throughout the years. Often, their presence is even the focal point of the title, or the foundation of its gameplay. Whether in providing “coolness factor” or the massive potential for outright destruction, the following are my ten choices for the top guns in retro gaming, in no particular order. 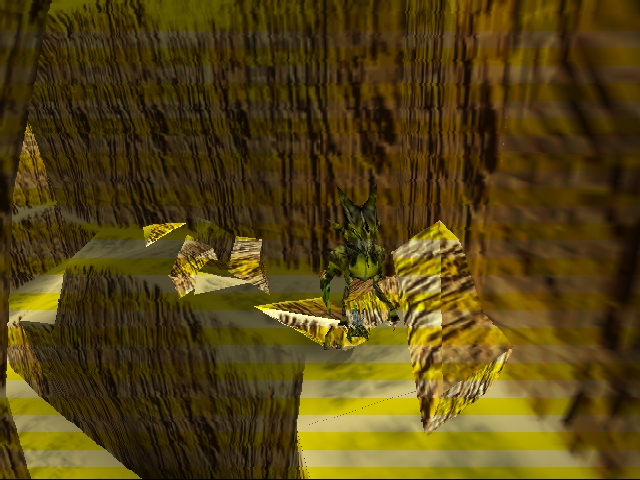 The rocket launcher is a classic weapon, as portrayed in both cinema and gaming alike. Combining sniper-scope precision with explosive detonation, rockets are a lethal choice in multi-player matches or zombie disposal. While there are many choices of cartridges or discs to draw this item from, Perfect Dark is a wonderful 64-bit FPS that adds a delightful new touch on the traditional missile formula: A fly-by-wire mode that actually allows the player to control the projectile’s flight path from a first-person perspective, and either detonate at will or upon impact with a foe or structure. The feature has hardly been emulated since, and notches the Slayer a spot on this list.

Any old-school gamer seeking a fast-paced run-‘n’-gun challenge would have to be insane, ignorant, or a straight-up Nintendo hater to avoid the legendary merit of Contra on the 8-bit Nintendo Entertainment System. This game is among the true greats, and anyone seeking to conquer its meaty challenge would be wise to grab the Spread option as soon as possible. The wide dispersal of its rounds makes for more efficient alien blasting, and the ability to fire from relative safety from creative angles. Real players know to grab the “S” icon and never let it go.

Not everyone is a fan of the Earthworm Jim series, but the first couple of cartridges in the series are true gems: Retro-style platforming difficulty alongside tightly developed gunplay with a healthy dose of distinctively zany humor. The recipe gave gaming some unique moments, garnering some fervent fans along the way. In the sequel, players are given multiple iterations of the Blaster to use, including the Barn Blaster; a gun that, by instantly destroying all on-screen foes, neatly subverts the old barb about being unable “to hit the broad side of a barn.” Who needs to worry about accuracy when everything on in sight blow up? Although there have been many video games made based on media licenses, such as those from popular movies, few reached the apex of both performance and popularity that the revolutionary console FPS Goldeneye 007 managed on the Nintendo 64 machine. Not only did it finally prove that a first-person shooter could work on a home gaming unit, but it offered a chance to relive iconic elements from the James Bond film canon. The Golden Gun is as iconic as they come, with an in-game function as absurdly powerful as it is crudely simplistic: If the round reaches its target, it kills.

Earlier, I may have implied that there would not be another rocket launcher on the list, but I have a soft spot for Jet Force Gemini, a science-fiction third-person shoot-‘em-up that was well ahead of its time. With branching character paths, enormous worlds, secret areas, and clever writing, it presents its audience with a superb, one-of-a-kind experience. But its biggest appeal may be its arsenal, and the crown jewel may be the Tri-Rocket Launcher, a weapon that combines pure explosive force with the multiple-round attraction of the aforementioned Spread rifle. However you want to describe it, the gun is the most powerful tool against the big-bug bosses, and provides a nice bursting-body effect on the smaller fry as well. Just in case you, uh, enjoy that sort of sadistic stuff.

Ah, the shotgun. Is there a greater symbol of gundom? Is there a more soothing feeling than discovering the first shotgun in a Resident Evil game, representing a “whew, finally!” moment of reprieve from what had been merely a pistol to hold the monsters at bay? Is there a more intimidating presence than the various more maniacal manifestations of the shotgun, like the automatic shotgun or the double-barreled version? And is there a more badass gun kill than watching Kyle Blackthorne coolly reach back with his boomstick to discharge a mean slug right into the face of an oncoming baddie – without looking? The no-look blast could earn Blackthorne a spot on this list by itself, but considering how heavily the shotty is leaned on throughout the game’s entirety, it does plenty of other heroics besides the eyes-forward routine. 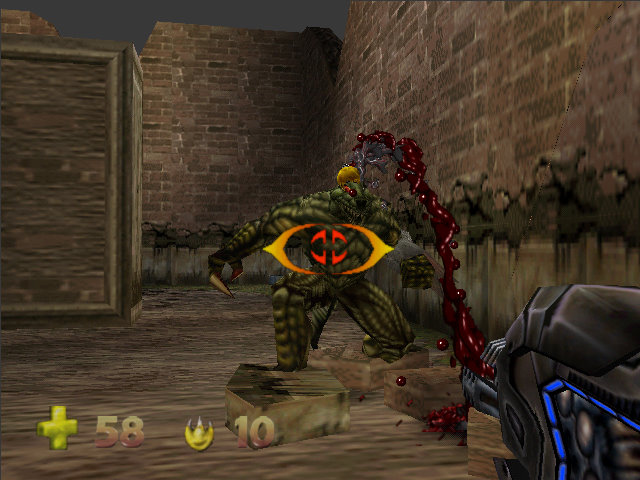 If unfiltered brutality is what you are after, and gore is your game, then you have lots of options in the gaming world, even among the retro set. A few of the possible selections try to themselves apart through distinguished service in the mission of maiming and disfiguring their victims, while others are inventive in their offings. For the more discerning kill streak customer, consider the Cerebral Bore for immaculate satisfaction.

Fire the rifle salute and unleash the beast: The Big Friggin’ Gun. The big one. The all-encompassing instrument of plasma death, the blaze-of-glory incinerator, the final countdown: This is the last line of defense against the onslaught of Hell. One big shot blasts apart everything in its radius, and launched the dominating dynasty of the FPS genre for ages. Mega Man goes through a lot of weapons on that Arm Cannon of his. Part of the Blue Bomber’s appeal, of course, is his gun versatility, as he gains differing shots dependent on the Robot Masters that he takes out. In the original six NES games, part of their toughness was trying to figure out which weapon to gain, in order to exploit the weakness of the next boss. Mega Man 2 sported an anomaly to the sequence, though, as the Metal Blade gun not only seemed most generally useful throughout the levels, but also the strongest option against more than one of the bosses. The Metal Blade lands a spot on the Top 10 list of Guns In Retro Video Games for its unprecedented multi-faceted talent and sheer like-a-boss efficiency.

Speaking of versatility, the Ice Beam is a memorable part of bounty hunter Samus Aran’s arm-gun arsenal. Much like Mega Man, she gathers power-ups throughout her adventures that unlock additional movement techniques and devastating weapons. Among these is the Ice Beam, a handy shot that proves useful not only in defeating Metroids, but also freezing them to use as ice block platforms to jump upon. Who says you have to be fiery and explosive to earn a spot on this list?

There you have it, my picks for the top 10 guns in retro video games. Did any of my inclusions seem stupid, or did you spot any glaring omissions? Feel free to leave a comment about your favorite guns in retro gaming.

Love the Ice Beam and Spread. Another personal favorite of mine is the Plasma gun in Super Empire Strikes Back.

Awesome list, totally forgot about the Jet Force Gemini weaponsHere is my list I posted a few months agohttp://fishysview.blogspot.co.uk/2012/06/top10gameguns.html

Oh how I love the Metal Blade.. Easily the best weapon in MM2.

I feel the Farsight (Perfect Dark) should get an honorable mention, along with the Wave Beam (Super Metroid). The Farsight was the end-all of all sniper rifles and the Wave Beam was handy as it was able to shoot through walls and through some of the tricky Blue Trigger posts.

@Paul Potvin And possibly in any Mega Man game. Maybe.

@MaulerGWR I agree, you could probably sub those in for the Slayer and Ice Beam -- but I try to limit on Top 10 item per game. Both of those had quite an arsenal, it seems!

@NintendoLegend Goldeneye, Perfect Dark, Jet Force Gemini and Super Metroid had quite a bit going in terms of arsenals. Who doesn't like the super missles in Super Metroid? You can kill Kraid in 2 or 3 shots, Phantom in either 6 or 7 (or several if you have poor timing), and the other bosses get felled pretty easily against them. Almost all of these games were Nintendo games too (not saying that is entirely a bad thing) which somewhat limits the playing field. :)