So I have a friend, whom I only know from the far reaches of the internet, who has proven that he can do the unfathomable.

He beat Ninja Gaiden I, II, III, AND (as of the other day) The Adventures of Bayou Billy all in a single life. And can back all of these claims up with corresponding Youtube clips.

The guy’s name is Nathan Phillips, and based on these feats alone, he is pretty much the closest human non-fiction counterpart to Kevin Flynn that I’ve ever seen.

(Yes. The main character from Tron. Who aced Space Paranoids. A game that doesn’t exist, and still in my mind ranks as one of the most formidable fiction based video game masters this side of Jimmy Woods or Lucas Barton, his box full of “ALL 97 NES games” and his freakin’ Power Glove.)

Anyway, every time he’s gone and done something like this, I’ve taken a moment to herald this achievement as something i don’t think I could ever, ever, without a chance, could do. (Well. I stand corrected. Maybe NGII. But that’s the one I ended up playing the most.)

And that’s because there’s something i have a fascination with.

Insurmountable challenges in retro video games. And the people with the balls of granite to utterly conquer them, if only for the self-gratifying pat your own damn back award.

I want to take a minute to talk about Tradewest/RARE’s Battletoads. (You’ve heard of it, right?)

I want to present a question that 85% of you may not have a clear answer to, but did you know that there are real, actual stages past the Stage 3 Bike Race?

This is not photoshop! This is an honest to god, real level of Battletoads, that takes place AFTER the part where most of you quit!

I know, right?! It shocked me too.

It has NINE more levels. Yeah. And trust me, none of them are as cake easy as the first two. Everything, pretty much from that point in the game is running from something, or dealing with things that are a complete pain in the ass.

As an aspiring, hopeful youth, with visions of growing into a prominent, respectable man, with a good career, various trophies boasting my Nintendo prowess, and at least one Hoverboard on hand, I made it a personal mission to play AND beat the ever loving hell out of every NES cartridge I owned. (Which, at the time, was at a whopping 45 cartridges, the largest among my group of friends, and could make a fourth grader feel like White Dolemite, a character so badass, I just made him up, and assumed the identity of.)

And let me tell you, out of those games, I can personally guarantee I beat ALL of them except for the ones that either had no ending (Let’s say, T&C Surf Designs, who’s only great memory is in that of the awesome stage music.), or Marble Madness (which, stands as the shortest and easiest game to summarize in history, from my consistent and eloquent remark of “Fuck THIS game.”).

That’s right. I BEAT Battletoads. And more than once! And I didn’t even cheat to do it!*

But what shocked me is the fact that the dominant group of people that had Battletoads in some capacity never did, and also, never knew there was a whole rest of the game to go through and swear at. (I’m looking at you, Stage 9 – Terra Tubes., you pink Gear chase-oriented son of a bitch.)

For them, the game was about 8 minutes of play time, until they got to some impossible fast paced part requiring cracker jack reflexes, memorizing things WAY before they happen, dealing with some of the worst collision detection in the world, and some kind of belief in divine forces to surpass, and then inevitably run out of lives, then continues, and then either put in Capcom’s Ducktales, or go outside and ride bikes or do something else.

Battletoads is easily classifiable as “Nintendo Hard.” – a term I’ve heard someone far wiser and versed in all things NES, use to accurately and concisely surmise the exact experience a gray cartridge is known to produce when compared to games in later generations.

It’s not the best example of a Nintendo Hard game, either, but there are many, not including the examples I’ve already mentioned.

I hate that a game with box art this rad sucks so much. It just feels inherently wrong.

Games such as Section Z, which is as much fun as being trapped in a burning elevator.

I feel my eye involuntarily twitching just looking at this box again.

Or Rygar. Which was Tecmo’s brilliant idea to make a game with Zelda II Adventure of Link length, except with a few lives, no battery backup and no continues.

Best box art ever. But man, will i ever revisit talking about this one…

Or this. (Which has is on the debate circuit whether or not it belongs here or not, even though I stand by it being both infuriatingly hard and gut-wrenchingly crappy.)

Everything about this is bad, and they should feel bad for making it.

Or Motherfucking Silver Surfer, if you’ve ever had the misfortune of having your parents buy that one for you, based on your passing fascination with Norrin Radd in the early 90s. Yeah. Much better than shelling out the buck for the battery pak, guys.

Even River City Ransom, which should at least get an honorable mention for expecting you to write this complicated ass password down to track your progress, but for the crapshoot of it actually working properly when trying to resume your game.
The list goes on.

I have respect for the inherent challenge found in a lot of the early to mid NES game library, because I felt it gave you a lot more for your (parent’s) money.

Case and point, something brought me back to Battletoads long enough to be able to finish it up. (It may have been the fact that it was another amphibian themed-badass with sunglasses violence simulator in an era that had found success with that formula.) But something about the challenge balanced out with the presentation of the game.

Something about it made it a task worthy of the undertaking. It started as a simple Double Dragon style beat em up in which, your fists and feet became comically large when administering a final attack on an onslaught of leather-clad S&M pigs, and then turned into an endurance match with each new stage, getting to the point where memorization and blind luck were going to be the only things to get you through this thing.

(It is to note that the Battletoads/Double Dragon followup seemed to really neuter down the difficulty in favor of providing more beat-em-up action, and less, escape from a gigantic one-hit kill gear in a hallway-type situations.)

This gets to another point of what I know I’ve covered in past columns, and will undoubtedly be redundant and mention again.

I wish more modern games had a coherent, fixed health system, a limit on lives, and more inherent difficulty that makes the game fun, while not shying you away. And that’s a tough balance to attain. All games have difficulty states now, which your average player either defaults, or sets to something easy (and boosts your max total live counts, if that persists.)

Battletoads had two difficulty settings; on or off. It didn’t give you an option of toning it down because you may not be a core gamer, or you might be turning this on for your six year old nephew who’s staying at your house for the weekend to play—it was just Battletoads: The game that wasn’t going to cut em no slack….wait. I think I’m mixing up my franchises, here. Anyway.

The most modern example of this effort in game release is the DLC Mega Man 9 from a few years back, which decided to give clamoring fan communities exactly what they wanted. 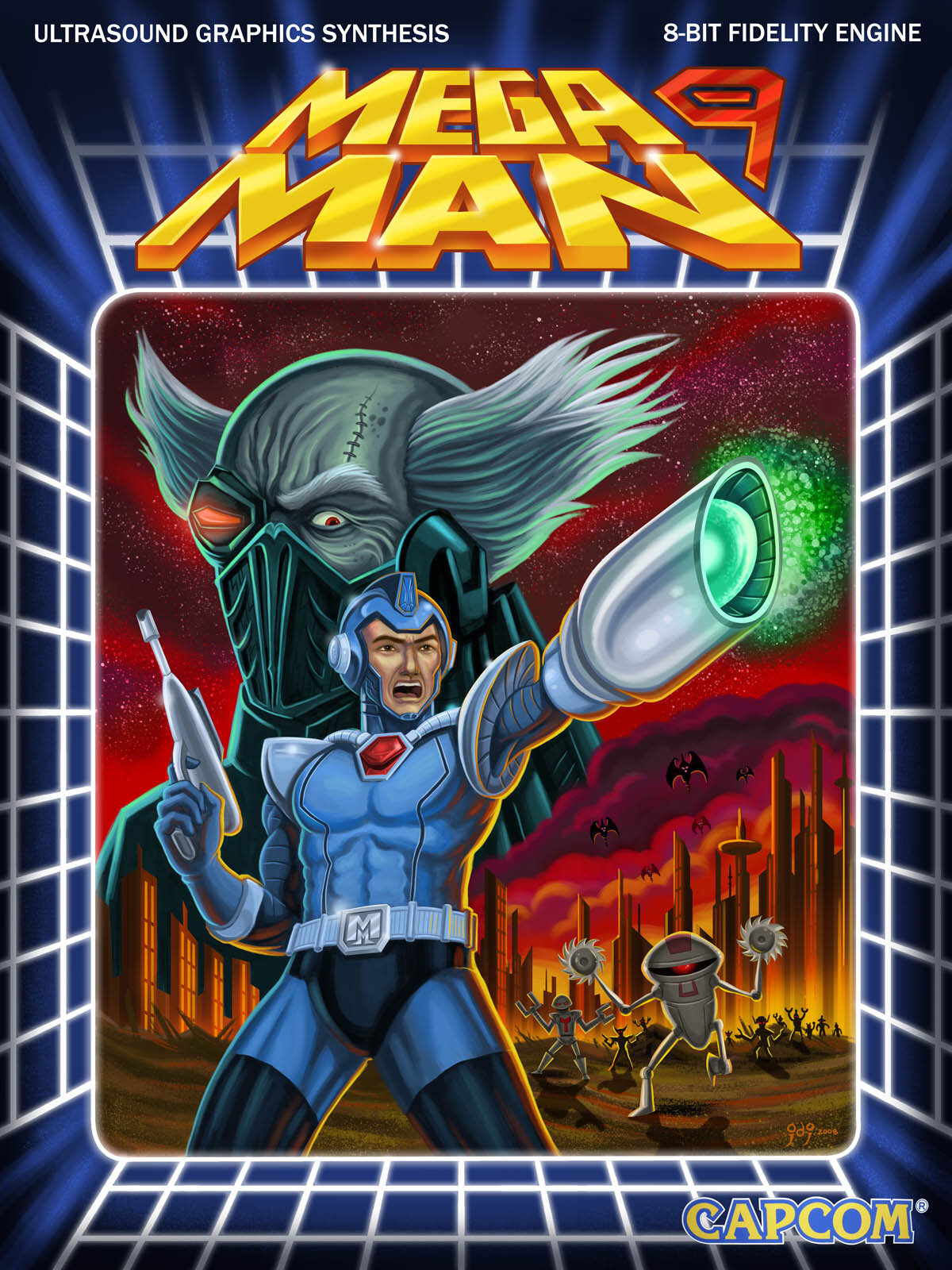 A NEW Mega Man Game, which was exactly like the Mega Man games they’ve already played 20 years ago.

Except while aging gamers returned with delayed muscle memory and delusions of being self-stylized masters of all things Blue Bomber related, (like someone I know), this game kept the difficulty somewhere around Mega Man 1, and disarming a bomb with using only your feet, while having your head submerged in a combination of ants and honey.

To be honest, I still can’t beat the damn thing. It brought Nintendo Hard back, in ways that can’t be quantified (which is strange, considering it’s the same tried and true formula of MM game that’s survived since 1989 and Mega Man 2.) And to be honest, I love it for it’s honesty. (MM10 cheaped out by giving you a heavily handed “Oh, you probably can’t do this. Here’s an easy mode option where we basically put pillows on every hazard, and the enemies fire candy at you instead.” Option.)

More games should have the balls to do this. To appear on some form of marketplace, playing off your nostalgia and say “Oh, it doesn’t just LOOK like those old games you remember, or take licenses from that stuff you’ve played. IT is the genuine article. And if you want to get through this, well, pucker up, cupcake, because this game is going to kick your ass.”

Because I’m confident that endgame payoff of “Yeah. I did this.” is going to carry a bit more weight to it than a game that lets you crouch behind a variety of cover, take a few deep breaths to heal off the GUNSHOT wounds you’ve taken, get up, and infinite live your way through an eight hour romp of negligible difficulty outside of tolerating repetition of seeing the same cutscenes and quick-time events over and over as the only red mark for failure.

There’s going to be a hell of a time getting me get as excited as 8 year old me from the achievement of beating a very hard game, leaping off my bunk bed, spiking my controller touchdown style, and doing a victory laps around my neighborhood screaming my head off all the way. (What? Didn’t you?)

But finding the satisfaction of taking a game that doesn’t just place me in an arbitrary role of a “hero,” as I meander to the end of a story without consequence or trial, but rather, through mastering it via extensive trial and error until complete ass ker-nihilation occurs – yeah. That’s the stuff.

Congratulations again to anybody out there who is good at anything. You have my deepest respects.

Excuse me. I’m going to find out why the hell I still can’t beat Marble Madness.

Poor Kitty... And I feel your pain... First computer I got barely ran DOOM and my second barely ran DIablo II. Didn't help me discover much PC games.

Even PCs have killer apps.