How retro gaming prepped me for office jobs

Hey folks… I have to admit, I’m kind of ashamed of myself after that last post… Publishing an article I wrote while half drunk on a beach chair lacked some professionalism and I apologize. Not wanting to repeat the same mistake, I was in dire need of some motivation. Fortunately, gaming has a solution for everything. This time, the answer was Classically Trained by Jon Harisson. Some of you may know him as @CT_Blog on Twitter, others may be familiar with the website.  Basically, using “allegamy”  to further your personal and professional development. I don’t want to dig too much into it, just check out this example instead. 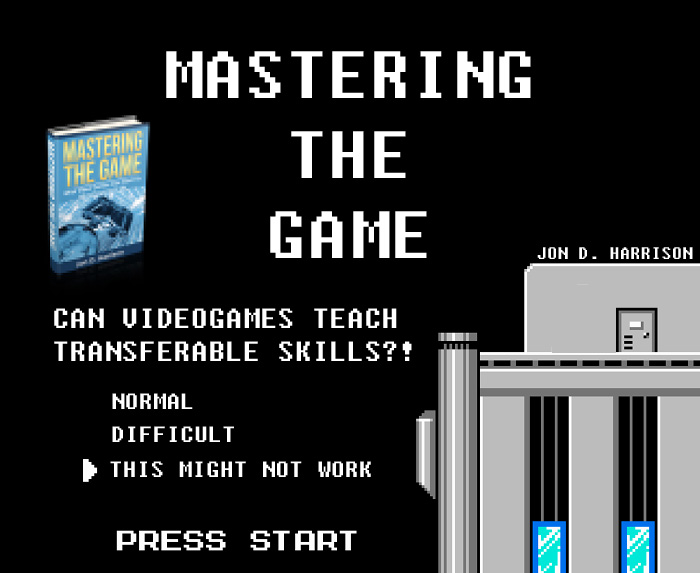 While I’m in full marketing mode, you might as well check out the upcoming book.

Anyway, it made me realize how much video games have taught me in all my gaming years. They even prepared me for the workplace. Some of you may not know it, but writing isn’t really my day job. Shocking, isn’t it? In fact, I work in an office on what some may call a typical 9-5 job. The existence of a link between this kind of job and video games seems doubtful, at first, but when you try to look at it in a different light, it becomes obvious. Retro gaming did prepare me for my office job.

Imagining “enjoying” an office job has become harder these last few years. The 9 to 5 pretty much turned from the American dream to the American nightmare. Of course, if you’re gonna be cynical and negative, you might notice all the wrong parallels.For example, you might compare the arrival on the workplace to the beginning of many RPGs. Supposedly, you have all the tools to become a great warrior, but you start off wiping out slimes feeling like the lvl 1 you are. Hitting the big green button on the copier might be the only thing you’ll be allowed to do with no skills under your belt. I mean, you’ll have to work overtime collecting your small amounts of gold just to afford the equipment needed to help every body in town. Not that anyone would give you away something for free to help them out…

10 more until I can buy the wooden keyboard…

It shatters your dreams, at first. In your academic establishment, they’ll tell you that you can be what you want to be, but they lie. Want to be a healer? You’ve got to start in the chemical labs. Want to be a warrior? Carry this equipment first. Then they’ll say all work is valuable work. Let’s face it: When someone can basically make energy appear out of thin air, just by thinking about it, what chances do YOU have of being respected when starting?

“You can be what you want to be!” Sure, when you’re a rich spoiled brat.

Anyway, it gets better. You start feeling less like an intern and actually meet some people. Of course, being somewhat new, you’ll have to remember networking is important. Be sure to talk to every NPC you meet in case they give you important information. Most of them are more interested talking about their stupid rat and how good it’s doing in its respective sport; others seem to be repeating the same thing every day; some are just way too stressed, like the world is ending or something.

There’s also usually an old guy who spends way too much time explaining something as simple as throwing a ball, but some are nice… Though, if you’re able to befriend someone, you’ll usually end up saving their ass at one point. Forced friendships will be a thing too… You know, synergy with your colleagues, even if they look like treacherous assholes who will stab you in the back the first chance they get. You don’t really have a say in who joins your party…

Ugh… I know how to file paperwork Old Man…

Sure the work can feel repetitive at times. You’ll reach some spots where, for hours on end, you’ll feel like you have to stop every two feet to dispose of some nuisance. You’ll see the light at the end of the tunnel, but, usually, when you’re starting to feel tired and just want to go back home, you’ll end up running into a boss that wants to keep you around for a while… If you manage to leave, be prepared for the same idiots to block your path all the way home… You will still stop every two feet. If only you could teleport. At least you’ll get a good night’s sleep, even if it does feel like just a couple of seconds.

Let’s not even mention the lunches… It feels like you’re eating the same thing over and over again. Sure, it restores your health and fruits are good if you want to keep a good score at the doctor’s, but a little variety wouldn’t hurt. Furthermore, it always feels like no matter what you do with your lunch, someone always tries to steal it.

Dang it Simon! That was my turkey!

What about the actual work? Well, most offices are fairly structured. People are assigned specific jobs with fairly obvious strengths and weaknesses. They usually don’t stray far from that mandate… well, except for you. You pretty much have to be good at everything. Let’s face it, some people have problem with their AIs and, without your intervention, things will fall apart. No matter how many times you allies fail, to be game over, you’re the only one who has to be knocked down.

Don’t worry though, the game of work isn’t that hard. Anyone with basic skills can power through it. Failures will more often than not be caused by faulty user interfaces. You know, tossing away the wrong item, selecting the wrong option, erasing your save… Technical issues that will usually force you to reload. They’re usually minor issues, but major obstacles can happen too. They’re not usual, but when a boss decides it’s time to use a cheap attack to decimate half of your party, there’s not much you can do. You can always try to go elsewhere to gain another kind of experience. Unfortunately, you often end up overleveled or grossly underleveled for the place you’re trying to explore.

Anyway… It’s all worth it in the end, right? Years of hard work will eventually lead you to the end. Sure, most of it will be grinding, visiting the same dungeons over and over again or barely being able to spend time home with your family; the most interesting parts will probably be sidequests, which are often optional and hard to find, but the end will come, and it will be just you, sitting on what you’ve obtained, living in a peaceful world… No more adventures, no more challenges, just retirement. People may forget about you and all you’ve done, reducing all your efforts to nothing. However, you’ll have your memories and you’ll cling to them… it’s the only thing you have to do anyway. Unless you move on to another job…

Listen, I’m sure I could find some positive “allegamy”… I just can’t think of anything right now… Phew… I’m feeling so overworked… Why don’t you go check out some Classically Trained instead? It’s not MY job to motivate you.

Next upWhen the Saturn was cool: Playing X-Men: Children of the Atom.

A game created just for you http://store.steampowered.com/app/301970/

You are the scum of the earth.

"I even see that you need to build additional pylons." YOU SCREEN LOOKED IN STARCRAFT!?!?!? YOU MONSTER!

@ericmhunter That is absolutely fantastic! I was actually thinking while writing this that someone had to do something similar!

@thedancinpanda Can't you accept me for who I really am?

@Chronoslinger Technically, I was screen hearing on that one. And I suck at Starcraft, give me a chance!

And to be honest, I thought you were going to point out that if my reference point was the corner of my own screen instead of the middle, I would not have seen the other screens in my field of view.

On an unrelated note, having the freedom to write anything stupid thing that comes to mind on a calculation sheet was SUCH a liberating feeling.

My head is spinning... Lol

@Aggro Sky Too many Mojitos