You know what’s really fun? Redoing a list after getting about 75% done! That’s what happened to this list and that’s why it’s a week late. Honestly, I was about ready to give up and repost an old list from ScrewAttack, but I decided to redo it anyway.

Because I’m a sadist.

Actually it’s because this list was fan suggested by Andrew Livingston and I owe it to him and all of you to get it done. This list is the top 10 most stereotypical 90s games of the 1990s. What does that mean? Well these games are games that embody the 1990s and were released between 1990 and 1999. The only other stipulation is that these games have to be original concepts… not based off TV shows, toys, movies, or other products because that would be too easy. One thing you’ll notice about games of the 90s is that they often focus on different modes of transportation. This includes but is not limited to skateboards, scooters, and of course……. rollerblades.

Rollerblade Racer is a game about exactly what it sounds like. This is 90s enough, but the cover of the game brings it to one of the most 90s games of the 1990s. Just look at that image above… bright colors, crazy clothes, pink and blue juxtaposed, and of course the word radical. 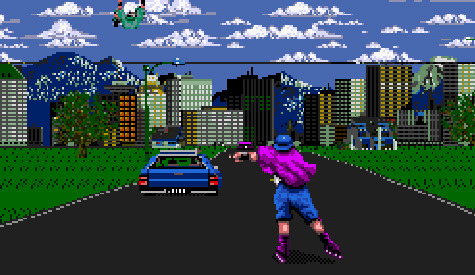 In this game you play as a rollerblader who is racing other rollerbladers. Everyone is wearing bright colors.

In order to speed up in this game you need to hold on to various vehicles as they drive down the road. This is called Skitchen’. The game is similar to Road Rash in that you race on various courses and purchase upgrades.

The game advertised itself as “Skatin’, Hitchin’, Bitchin’, Skitchin'”.

Also check out that boxart. It’s about a skateboarding and fire-breathing T-Rex on a quest to save his girlfriend, Rexanne, from an evil sorcerer. Yup we’re going with skateboards, puns, dinosaurs, and radical right away.

This game pretty much combines everything above in a mediocre game. That’s why it’s not any higher on this list.

One major fashion sense of the 1990s is a white t-shirt, jeans, and a leather jacket. You’ll probably see this fashion sense multiple times on this list. Polterguy is our first example of this trend.

In this game Polterguy is a punk teenager who was killed in a tragic skateboarding accident. He haunts the family of the man who designed the faulty skateboard in an effort to return to the land of the living. Kid Chameleon exemplifies two trends in the 1990s. He has the jeans, white t-shirt, and leather jacket fashion sense… and he’s trapped in a virtual world.

This was a big part of all 90’s media and media in general. In Kid Chameleon a boy named Casey aka Kid Chameleon is trying to beat a virtual reality video game to free all the other gamers trapped in the game.

In the game, Kid has the power to transform into different warriors to stop the out of control AI and its minions. Awesome Possum was a game that tried to cash in on many fads of the 1990s but failed miserably. The game was about a Possum who’s trying to stop the evil Dr. Machino.

As mentioned before this game features many staples of the 1990s. Awesome Possum first tries to cash in on the mascot craze like Mario and Sonic, then it includes an environmental friendly message, then it includes mild swearing with the “kicks butt” line, and finally it describes itself as awesome.

This game is anything but awesome, but it is 90s as hell.

4.) Boogerman: A Pick and Flick Adventure

As we’ve seen from the previous entry, being slightly risque was a big trend in the 90s. This included mild swearing, some gore, but most of all… gross out humor.

This is where Boogerman comes in. Boogerman was a gross superhero. He used his boogers as weapons and burped and farted his way through various sewer/toilet themed levels.

In addition, this game had dirty puns! Dimension X-Crement, Professor Stinkbaum, Snotty Ragsdale, and so much more.

In this game… you can fly-fart. Greendog was another failed mascot attempt by Sega. It’s a good thing Sonic took off otherwise Sega would be screwed.

He is a 90s surfer dude. He only cares about surfing. He has a gyrocopter, inline skates, a skateboard, and an antique Frisbee (whatever the hell that is). He only says “dude” and “cool”. He’s sent on a quest to collect ancient Aztec artifacts which are actually just pieces of an ancient flying surfboard.

Just like Kid Chameleon and other 90s games… apparently all this game takes place in a fictional world. He’s a beanie wearing dog who raps about everyday life… like pooping, driving, and selling stuff at a flea market. Yup… it’s Parappa the Rapper.

I don’t really know what’s so 90s about this game. It could be the simple paper cut out style, the odd graphical design or fashion sense, or the absolutely terribly cheesy raps… but this is another game that’s 90s as hell.

In this game Parappa is on a quest to impress a girl by learning Chinese, crashing his dad’s car, cooking, and having an epic rap party on stage.

If you want a game that symbolizes everything the 90s has to offer, Toejam and Earl is it. Almost everything I mentioned above is in this game.

If you don’t already know Toejam and Earl is a series of games starring two rad aliens. These games have the rapping and fashion sense of Parappa the Rapper with Toejam rocking a Flava Flav chain and sick kicks, while Earl had brightly colored shorts and sunglasses. This game has the transportation of the 90s with Toejam and Earl both rolling around on rollerblades. The alien duo speaks in California slang that dates the game badly. Finally the game features a funky urban jazz soundtrack.

In addition to being a game that represents the 90s, it also parodies the decade. In both the first and especially the second game human culture and the 90s if heavily made fun of. This game isn’t just a product of the 90s…. it is the 90s.

You can help bring it back by supporting the Toejam and Earl Kickstarter.

Next upGMZ #2-9 – Pac-Man and Extinction

My favorite on your list is by far the Contra III final boss theme. Just an epic, awesome tune that totally sets the tone. I spent way too much of my childhood playing that game and the music was a huge part of it

@Aggro Sky but last springsteen is much better